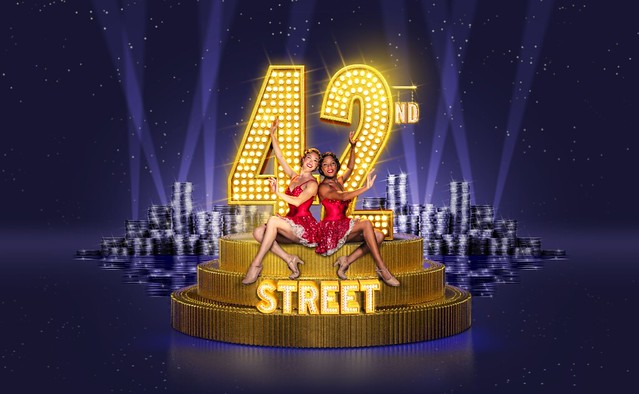 David Ian for Crossroads Live UK and Jonathan Church Theatre Productions are delighted to announce that the Curve and Sadler’s Wells production of the musical 42nd STREET will open at Curve, Leicester on Wednesday 17th May 2023, followed by a season at Sadler’s Wells, London from Wednesday 7th June 2023 before embarking on a UK tour where the show comes to Theatre Royal Plymouth from 07 – 12 August.
This new production will be directed by Jonathan Church (Singin’ in the Rain, The Drifters Girl) with choreography and design by Olivier Award winners Bill Deamer and Rob Jones. Casting and full creative team will be announced in due course.

This iconic song-and-dance spectacular features a hit parade of toe-tapping songs, including the title number, “We’re In The Money”, “Lullaby of Broadway”, “Shuffle Off To Buffalo” and “I Only Have Eyes For You”. 42nd STREET is a timeless and inspiring showbiz fairy tale that combines breath-taking tap dance routines, backstage intrigue, classic romance and delightful comedy to dazzling effect.
Fresh off the bus from small-town America, young and beautiful Peggy Sawyer arrives in New York City dreaming of her name in lights. She quickly catches the eye of a big-time director and lands a spot in the chorus line of Broadway’s newest show…and when the leading lady gets injured, Peggy gets her shot at stardom.

42nd STREET is a larger-than-life, massively entertaining celebration of musicals and the irrepressible spirit of Broadway that’s guaranteed to lift anyone’s spirits.

42nd STREET has music by Harry Warren, lyrics by Al Dubin, and book by Michael Stewart and Mark Bramble, based on the novel by Bradford Ropes. Original direction and dances were by Gower Champion. The show was originally produced on Broadway by David Merrick.