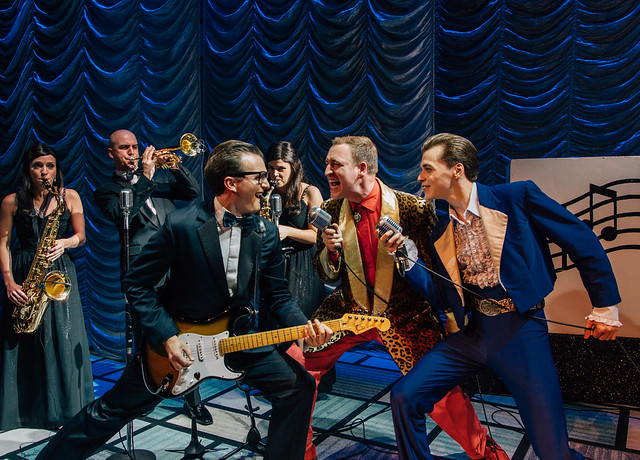 On the back of an incredibly successful 30th year anniversary tour, smash hit rock & roll musical Buddy – The Buddy Holly Story is back in the UK for 2023 and visits Theatre Royal Plymouth from 30 May – 3 June 2023.

The musical first opened at Theatre Royal Plymouth in August 1989. Since then, Buddy has enjoyed phenomenal success, having played a record-breaking 4,668 performances over 580 weeks on tour in the UK and Ireland, as well as 5,822 performances over 728 weeks in London’s West End.

Buddy is one of a small number of iconic musicals including Les Misérables, Phantom of the Opera, Joseph and the Amazing Technicolour Dreamcoat, Miss Saigon, Evita and Cats in reaching a phenomenal three decades on stage.

Loved by critics and audiences alike, Buddy tells the enduring story of the musical icon’s meteoric rise from his Southern rockabilly beginnings to international stardom and his legendary final performance at the Surf Ballroom in Clear Lake, Iowa, before his tragic and untimely death at the age of just 22. In 18 short months the bespectacled boy from Lubbock, Texas, revolutionised the face of contemporary music, and would influence everyone from The Beatles to Bruce Springsteen and the Rolling Stones.

Boasting a multi-talented cast of actor-musicians, Buddy presents two terrific hours of music with over 20 of his greatest hits, including the timeless classics That’ll Be The Day, Peggy Sue, Oh Boy, Everyday and Rave On. With the Big Bopper’s Chantilly Lace and Ritchie Valens’ La Bamba, and rip-roaring versions of Shout and Johnny B. Goode completing a stellar musical line-up, Buddy is a not to be missed evening of family entertainment.

Writer/Producer Alan Janes says: “We are so excited to be back on tour and to see our audiences – aged 8 to 80 – dance in the aisles every night to our story of a young man whose musical career spanned an all-too-brief period, but whose music will be remembered forever.”

Since its inception, Buddy has inspired a generation of multi-million selling jukebox musicals including Mamma Mia and We Will Rock You yet remains the true original and a musical phenomenon. Seen by more than 22 million theatregoers since it opened in London’s West End in 1989, Buddy speaks an international language and continues to have audiences rockin’ in the aisles across the globe!

Tickets for Buddy – The Buddy Holly Story at Theatre Royal Plymouth are currently on sale to Members.

Tickets will be available for the general public from 23 September 2022 via the website.