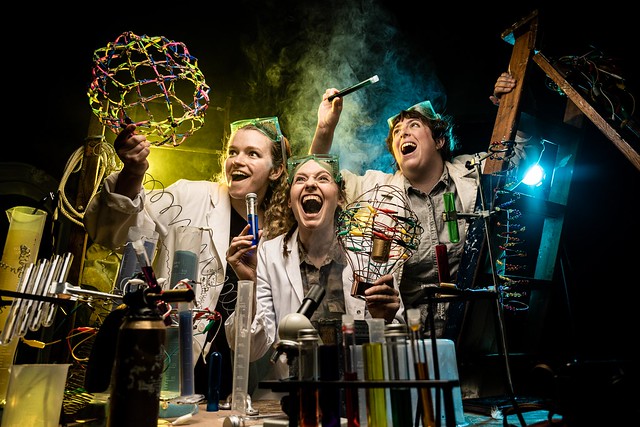 There is also a show about The Wampanoag Nation told by them through singing, dance and spoken word, followed by a takeover in the Drum the following week.

Take a look at the new productions today to be among the first to book for the best prices and availability!

Tickets are on sale now on the TRP website.

Welcome to the Seldomberg Science Fair,

Ideas are bubbling in the air!

In the snowy town of Seldomberg test tubes bubble, experiments explode and new

inventions whirr for the Science Academy’s Final Exams. But Faina’s got a problem… her project has unexpectedly burst into flames!

Desperate to pass her Final Exams, Faina sets off on a perilous expedition to find the legendary Snow Beast. With help from her owl assistant Maude, they encounter extraordinary spectacles and mountainous obstacles as they battle through the wild, wintry wilderness in search of the truth.

Can you help Faina and Maude overcome the scientific puzzles along the way? Does the Snow Beast even exist?

This show is a captivating collision of storytelling, original music, puppetry and interactive science experiments, inspiring budding scientists of all ages.

A new show from James Rowland featuring his captivating mix of theatre, comedy and music.

LEARNING TO FLY sees James tell the story of a remarkable friendship he made when he was a lonely, unhappy teenager with the scary old lady who lived in the spooky house on his street.

It’s about connection, no matter what the obstacles; about love’s eternal struggle with time; about music and its ability to heal.

It’s also about her last wish: to get high once before she dies.

Uplifting, big hearted and hilarious, this brand new show is touring following a sell out run at the Edinburgh festival.

Joe has always been a nerd.

In his teens, he hid it. In his twenties, he owned it. Now in his thirties, Joe is still obsessed with Star Wars, Nintendo and The Muppet Christmas Carol. But he’s started to sense something: a great disturbance in the fandom… Alone, sorting through his old things, Joe finds an old video tape, in an old VCR, long forgotten. He presses play – and something amazing starts to happen…

Fanboy is a love-hate letter to pop culture and nostalgia. Award-winning writer-performer Joe Sellman-Leava (Fringe First, Labels) explores our relationship to our past and future selves, and asks why his generation is so obsessed with its childhood.

From Seamas Carey (creator of The Reason Why podcast), comes the controversial sell-out comedy show on identity, second homes, xenophobia and bagpipes.

Who am I?
Where do I belong?
And who should I vote for?

Some people see it as a separate nation; others see it as a prime holiday destination and playground for the rich.

He is desperately trying to understand.

He’s watched a wave of gentrification sweep through his rural hometown. There’s nowhere to live, yet second homes stand empty. He wishes Cornwall was more welcoming and inclusive, but watches “up country” money sow division and suspicion.

Could closing borders and nationalism be the answer?
Where’s the line between pride and power?
What happens when it all goes too far?

“The whole system needs a reboot, refresh, restart. Revolutions’ possible, hear me share from the heart. See us youngers? Online scrolling, always visible. But the Truth is I feel invisible. The youth of today have got so much to say but no-one’s listening.”

Leilah is wondering if her Instagram is more of a burden than ‘living her best life’. Billy’s queer and proud but ignored by the education system; they’re tired of feeling invisible.

Aarron is learning how to be a man online and it’s starting to feel toxic. And Maisy, well Maisy’s not that into sex, thank you very much.

Thrown together, these four confront their differences and realise their power to create change.

“[The bicycle] has done more to emancipate women than anything else in the world. It gives women a feeling of freedom and self-reliance. I stand and rejoice every time I see a woman ride by on a wheel” – Susan B Anthony, Women’s Rights Activist, 1896

March 2020. Dynamic single mother Kit’s world suddenly shrinks. Staying at home to save lives means a retreat back to the role of mother and home-maker. With the walls closing in, the garage and 2 wheels become her sanctuary…

On Track is a new play drawing on true stories and using RedCape’s trademark blend of comedy and visual, physical theatre. The audience follow Kit’s journey of discovery through the shocking history of women’s cycling. Riding at night, disguised as men, these cycling pioneers powered over Victorian ideals of the genteel, house-bound woman and opened up new worlds.

On Track explores mental health and tells the story of how, during lockdown, a simple bicycle became a vehicle to freedom once again.

As Kit pumps up her tyres and ventures out, we hope you will leave confident and inspired to ride out on your own too.

The magic of David Attenborough live!

A blue whale swims through the depths. Racer snakes pursue an iguana across the desert. Two hapless fools recreate wonderful scenes of the natural world.

Catch this award-winning, five star show for an epic display of clowning, physical theatre and the largest range of animals you will ever see on stage.

A must see for the whole family.

The perfect musical show for little rebels looking for action, excitement and live music. ‘Jonny Feathers’ bursts on to the stage this Easter complete with guitars, drums, puppets and bubbles (with cheeky jokes thrown in for good measure!)

Jonny Feathers has lost his guitar! – can you help him find it? On the search we meet Vicky the Vixen, Bale the Snail (who invites Jonny in for tea in her shell) and Basher the Badger, lost on the way home from Glastonbury!

A treat for all the senses, this heart-warming, hilarious show celebrates the power of friendship, unity and helping others. Packed with brilliant original new songs, ‘Jonny Feathers’ is sure to have your little ones singing and dancing all the way home!

We Are The Land is the story of The Wampanoag Nation told by them through singing, dance and spoken word.

The Wampanoag have been stewarding their land for over 10,000 years across several of the Eastern States of the USA including Massachusetts. Their land was the land the Pilgrim Fathers landed on and colonised, creating settlements that established modern America to the detriment of the Wampanoag nation.

The voice of the Wampanoag was silenced.  But they are the land, and We Are The Land is an opportunity to understand their relationship to the soil, how it was taken away and how the tribe have re-established themselves written and performed by the tribe, for the first time in history.

We Are The Land is the story of The Wampanoag Nation told by them through singing, dance and spoken word.

The Wampanoag have been stewarding their land for over 10,000 years across several of the Eastern States of the USA including Massachusetts. Their land was the land the Pilgrim Fathers landed on and colonised, creating settlements that established modern America to the detriment of the Wampanoag nation.

The voice of the Wampanoag was silenced.  But they are the land, and We Are The Land is an opportunity to understand their relationship to the soil, how it was taken away and how the tribe have re-established themselves written and performed by the tribe, for the first time in history.

Take a look at the schedule here: https://theatreroyal.com/whats-on/wampanoag-takeover/

One day, a magpie comes into a little girl’s house by mistake. It decides it likes her. She spends the next twenty-five years trying to get away from it.

Stop Trying to be Fantastic is a story about suffering, saviour-complex, self-acceptance, and a magpie who refuses to quit.

From award-winning writer/performer Molly Naylor (Whenever I Get Blown Up I Think Of You, Sky One’s After Hours) comes this lyrical and funny spoken-word show that explores what we owe to each other and what we owe to ourselves.

It’s an anti self-help show… that might actually help.

FAMILY TREE is a beautifully poetic drama about race, health, the environment, and the incredible legacy of one of the most influential Black women of modern times.

Fearlessly honest, hilarious, and ultimately transformative, this award-winning play is both a remembrance and a celebration.

Henrietta Lacks is one of most remarkable people in medical history. Her cells form the basis of the most important medical research and breakthroughs happening today, from cancer to HIV to COVID.

But Henrietta never knew any of this. Her cells were taken without her or her family’s knowledge or permission.

Henrietta was a Black woman: she is not the only one whose body has been exploited by the medical establishment.

Denied her place in history, now is the time for Henrietta’s incredible legacy to undergo a transformation … to blossom and grow into something new and wonderful.

‘The show that we’re about to do is a story of the future. The story we’re going to tell is the story of us. I’m going to tell you this now: it doesn’t have a happy end.’

A lone performer tells the story of the future of the audience; what’s going to happen to them in the decades, centuries, millenia after the end of

this show. It’s the story of a baby born in a lighthouse, of someone on fire in the middle of the desert, of two lovers reunited in a flooded city, of a spaceship on the edge of a black hole. Everything has already been decided. This is the story of the end.

From the makers of Five Encounters on a Site Called Craigslist and the accident did not take place comes an act of communal storytelling. A hopeful, hopeless prophecy for earth and humankind. A story of us, our future, of paradise and how we get there in the end.

One morning Gregor Samsa awakes to find himself changed. To those around him he is dangerous, untouchable vermin. Worse than that, he is a burden.

A word said, an action out of place, the opening of old wounds, none of which can be undone. Until now Gregor has woken every morning, quietly left to take the same train, and worked to pay off the family debt. But that world explodes on this morning of brutal metamorphosis.

In their first commission since 2019, Frantic Assembly and Lemn Sissay O.B.E. collaborate on this thrilling new adaptation of Metamorphosis.  Combining the fluidity and lyricism of Lemn Sissay’s adaptation and Frantic’s uncompromising physicality, this promises to be an unmissable retelling of Franz Kafka’s shocking tale of cruelty and kindness; a visceral and vital depiction of humans struggling within a system that crushes them under its heel.