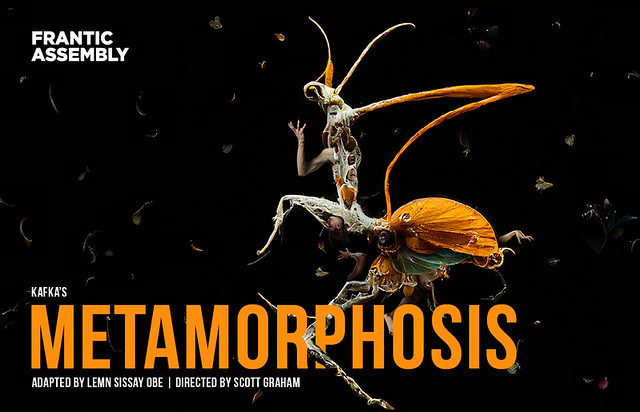 Frantic Assembly will collaborate with internationally celebrated poet, playwright and broadcaster Lemn Sissay OBE on a new adaptation of Franz Kafka’s shocking tale of cruelty and kindness.  Metamorphosis is a visceral and vital depiction of humans struggling within a system that crushes them under its heel.

This is Frantic Assembly’s first new production since 2019’s I Think We Are Alone and is a co-production with Theatre Royal Plymouth, Curve, MAST Mayflower Studios and Lyric Hammersmith Theatre. Frantic are renowned for their use of physicality and movement in their work and Metamorphosis will be no different.

Metamorphosis sits aside Frantic’s Othello as the second production in their Iconic strand of work. Iconic sees the company take on titles that bring with them so much history and baggage, love and opinion and create vital, thrilling contemporary theatre.

Kafka’s Metamorphosis has burnt itself deep into our psyche. It is absurd and horrific. It is tragic and heart breaking. Gregor Samsa finds himself transformed from bread winner into burden. It is a devastating portrayal of a man trapped and crushed under the heel of a system that no longer finds him useful.

Metamorphosis is an inherently visceral production. It is about the limitations of the body and the mind, of our imagination and aspiration. It has such a rich and intense physicality that extends far beyond one character’s sudden transformation. It aches with the desire to break free and the violence of its suppression.  All of this, coupled with the fluidity and lyricism of Lemn Sissay’s adaptation and the uncompromising physicality of Frantic Assembly, promises an exciting and dynamic show, not to be missed.

Frantic Assembly are thrilled to be working with Lemn Sissay on the adaptation of the Kafka novella.  Talking about the collaboration Lemn Sissay said:

“This will be my second adaptation after Benjamin Zephaniah’s Refugee Boy in 2013.  Words make movement, words precede movement and words (spoken or written) are movement.  Frantic Assembly is the theatre of movement.   My aim is to move the audience and to be moved. Metamorphosis is iconic.  I am nervous, like an olympian, a  long distance runner, the starting gun has fired, dust plumes beneath my feet, the end is a long way away. I pace myself, I focus and I concentrate…”

“I am absolutely buzzing to be collaborating with the wonderful Lemn Sissay. The potential of this project to spin physical and lyrical poetry around this classic story thrills me. This is a meeting of minds, ready to play and explore and find out what we can bring to this iconic title. ”

In response to Metamorphosis’ run at the Lyric Hammersmith Theatre, Young Lyric in collaboration with Frantic Assembly, will deliver a schools’ response project for West London secondary schools. Using devising and physicality taken from the Frantic Method theatre students will explore the production themes over a series of FREE in school workshops. The response will culminate in a new schools performance at the Lyric Hammersmith Theatre as part of a collaborative sharing of learning and ideas between theatres and educational institutions.

Metamorphosis will follow Frantic Assembly’s current touring production of Othello which has played to packed houses across the country this autumn and will run at Lyric Hammersmith Theatre from 19 January – 11 February 2023.

The full creative team will be announced in the new year.