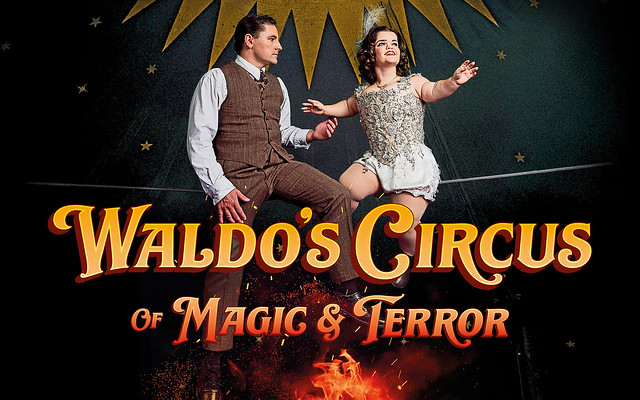 Set in 1933 Germany, where fascist whispers have grown to shouts, Waldo and his eclectic troupe of acrobats and clowns dedicate themselves to their craft. Concealed within the glamour of Waldo’s big top, stories of love, courage and resistance are revealed as the world outside this remarkable circus troupe becomes darker and more dangerous. The story is informed by historical research and the experiences of real performers. The star of Waldo’s Circus is ‘Krista’ played by Abbie Purvis with Dominic Owen as ‘Gerhard’. Waldo’s Circus of Magic & Terror is a large scale collaboration between D/deaf, disabled, and non-disabled artists and creators and tours nationally in 2023.

Waldo’s Circus of Magic & Terror is presented by Extraordinary Bodies based on an original idea by Hattie Naylor (Ivan and the Dogs, The Night Watch) and co-written by Hattie Naylor and Jamie Beddard (Messiah, The Elephant Man). The composer is Charles Hazlewood (Artistic Director, Paraorchestra) and it is co-directed by Claire Hodgson (Diverse City) and Billy Alwen (Cirque Bijou). Waldo’s Circus is co-produced with Bristol Old Vic and Theatre Royal Plymouth. All shows are Chilled Performances, BSL interpreted, captioned and audio described.

Extraordinary Bodies acknowledge the Holocaust and the millions of Jewish victims, and other groups* including Disabled people who were targeted for persecution and murder. In making this work, the company affirms its unwavering commitment to counter antisemitism, racism, and other forms of intolerance that may lead to group-targeted violence.

The world of Waldo’s Circus of Magic & Terror takes the painted-on glamour, skilful risk-taking, fierce loyalty, and the idea that ‘the show must go on’ as its narrative pillars. Set in 1933 when the law for “Prevention of Offspring with Hereditary Diseases” is passed, Waldo the Ringmaster with his travelling circus of outcasts and misfits, acrobats and aerialists, lovers and fighters are surviving in the fervour of Hitler’s dictatorship.

Jamie Beddard, writer said: “As a disabled person and artist, I’m acutely aware of the stigmatisation of particular groups and people through the growth of fascism in the past and now. The popularity of Eugenics in early 1930s Germany marked the beginning of a dark chapter in history where millions of people who were deemed not to conform were brutally hunted down and ‘dealt with’. Whilst researching this period, the role of the circus in helping some of these people escape and find sanctuary provided the basis for Waldo’s Circus. Our dramatic exploration of this moving and brave story reminds us to be always vigilant, and with the energy, skills and creativity of our artists, we hope to create a spectacular, meaningful and vital piece.”

Hattie Naylor, writer said: “The inspiration and story of Waldo’s Circus evolved from initial interest and conversations generated by Todd Browning’s iconic film Freaks, released in 1932. It occurred to me that there must have been circuses in Germany that had so-called ‘freak shows’ at that time. So, I started researching, and I found that not only was this the case but these performers were smuggled out of the country through the circus networks, to Paris and beyond. Jamie, Extraordinary Bodies and I worked on the characters together, taking inspiration from a variety of circus artists from both the past and present. Extraordinary Bodies is not only doing radical work but is utterly inclusive and aims as a principle to make everyone welcome and heard. It is a privilege to work with a company with this profound ethos at its heart.”

The score is composed by Charles Hazlewood and developed alongside rehearsals, and research and development sessions with the cast and creatives. The music promises a bold mix of styles with live, multi-instrumentalists onstage.

Charles Hazlewood, composer said: “When I write a score for a piece of theatre, I write for the performers in the rehearsal room and borrow from each and any, and all musical worlds. For Waldo’s Circus where Hattie and Jamie have written very beautiful, lyrical prose, I thought – how about if we created a kind of punk circus that also borrowed from new romanticism, techno and renaissance? There’s no incongruity about having a punk aria followed by a piece of renaissance counterpoint – and that’s what the show will be. Extraordinary Bodies is a phenomenally skilled, and ultimately, very, very open-hearted, adventurous bunch of individuals.”

Abbie Purvis is an actor and musical theatre performer. She plays ‘Krista’, the star of the circus and the main attraction. She has a brave heart and is funny, sassy and loyal. The circus is Krista’s family and the only place where she has felt safe. Purvis comes from a lineage of actors, she is the granddaughter of Jack Purvis (Time Bandits, Monty Python and Star Wars) and her mother Katie Purvis played the iconic role of Maternal Ewok in Star Wars: Episode VI Return of the Jedi.

Extraordinary Bodies is a collaboration between Cirque Bijou and Diverse City, who have worked together for the last decade creating multi-disciplinary circus shows with D/deaf, disabled and non-disabled artists.

Claire Hodgson and Billy Alwen, Co-Directors, Extraordinary Bodies said: “In Extraordinary Bodies’ shows, we try to reflect the world as it truly is – on stage. It is important that our work connects the inside and the outside of theatres to the audiences that see it, and we embed the work as much as possible in the community before and after the shows. Waldo’s Circus is a cross-genre feast, and the music is surprising, jumping across genres and decades. The circus will be varied and exciting. It is quite punk, feisty, astonishing and about the best of us and the worst of us as humans. You will be entranced by the performers and their characters and unable to forget the beautiful writing and the songs.”

Waldo’s Circus of Magic & Terror comes to The Lyric stage at Theatre Royal Plymouth from 26–29 April 2023 and tickets can be booked via the TRP website.