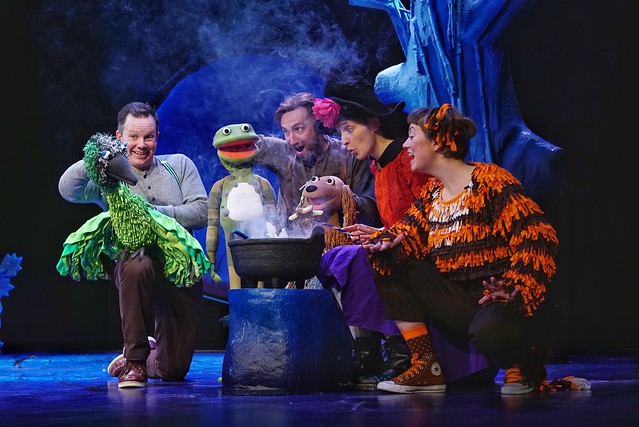 Tall Stories is delighted to announce that the company’s Olivier Award-nominated adaptation of Julia Donaldson and Axel Scheffler’s classic picture book, directed by Olivia Jacobs, will fly into the West End this summer to enchant everyone aged 3 and upwards. Jump on board the broom with the witch and her cat in this fun-filled magical musical adaptation running at Theatre Royal Plymouth from 05 – 08 February 2023.

The witch and her cat are travelling on their broomstick when they pick up some hitchhikers – a friendly dog, a beautiful green bird and a frantic frog. But this broomstick’s
not meant for five and – CRACK – it snaps in two… just as the hungry dragon appears! Will there ever be room on the broom for everyone?

With enchanting puppetry, sing-a-long songs and hilarious fun, Room on the Broom is an ideal summer family treat and a magical introduction to theatre for young children.

Acclaimed theatre company Tall Stories is renowned for its joyful, fun-filled productions for family audiences that have toured all over the world. The company’s adaptations of the best-selling picture books by Julia Donaldson and Axel Scheffler have included productions of ‘The Gruffalo’, ‘The Smeds and The Smoos’, ‘The Snail and the Whale’ and ‘The Gruffalo’s Child’.

Director and Tall Stories co-founder Olivia Jacobs said: “I’m thrilled that Tall Stories is returning to the Lyric Theatre with ‘Room on the Broom’ this summer. After a difficult time for touring theatre companies, this story of pulling together in times of adversity feels very apt. We’re looking forward to bringing a sprinkling of magic to families this summer with this funny, fast-paced, high-energy show. Come and join us – there’s plenty of Room on the Broom!”

Toby Mitchell, Tall Stories’ artistic director and co-founder, said: “Tall Stories has produced 31 shows in our 25 years of existence – including five adaptations of muchloved books by Julia Donaldson and Axel Scheffler, alongside many smaller scale shows. We first brought ‘Room on the Broom’ to the stage in 2008 and since then it’s toured nationally and beyond – including France, Germany, the US, Australia and the Far East. We were delighted that the show was nominated for an Olivier Award in 2013 – and this return to the Lyric Theatre marks the fourth West End run for the show. We’re particularly excited about bringing some magical spells, catchy songs and lots of laughter to family audiences this summer, following the uncertainty of the last couple of years – and we can’t wait to see all those smiling faces.”

‘Room on the Broom’ was created in 2008 by Tall Stories and has toured the UK and Ireland extensively, as well as numerous international tours including Australia (inc. Sydney Opera House), Hong Kong, Singapore, Dubai and Poland. The show has also been translated into German where it tours regularly with Junges Theater, Bonn. In 2013 ‘Room on the Broom’ was nominated for a prestigious Olivier Award for Best Family & Entertainment production.

‘Room on the Broom’ is directed by Olivia Jacobs, designed by Morgan Large, with puppet design by Yvonne Stone, lighting design by James Whiteside, choreography by Morag Cross and music composed by Jon Fiber and Andy Shaw.