Shrek the Musical heads out on UK and Ireland tour, starting at Theatre Royal Plymouth in Summer 2023 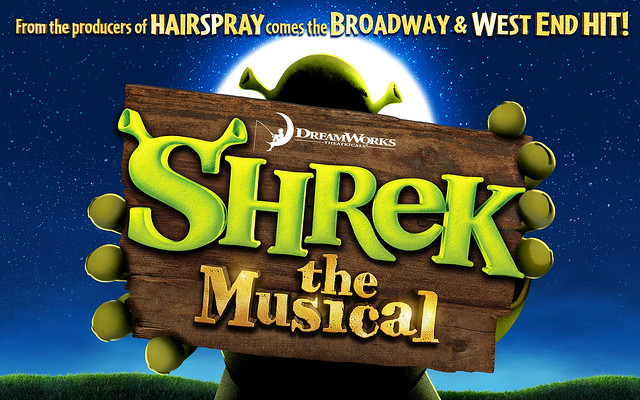 New production of Shrek the Musical heads out on UK and Ireland tour, starting at Theatre Royal Plymouth in summer 2023

A brand-new production of Shrek the Musical heads out on a major UK and Ireland tour opening at Theatre Royal Plymouth on 21 July 2023.

Producers Mark Goucher, Gavin Kalin and Matthew Gale are delighted to announce a brand-new production of the award winning Broadway and West End hit show Shrek the Musical will tour the UK and Ireland from July 2023.

The bright and beautiful fairy-tale world of Shrek will be reimagined by a new creative team for this major tour. All the classic characters from the Oscar®-winning DreamWorks animated film will be back to paint the town green, accompanied by the iconic songs and story from David Lindsay-Abaire and Jeanine Tesori’s original musical.

Having played Lord Farquaad in the previous UK tour, Sam Holmes (Club Tropicana the Musical) returns to the swamp to co-direct. He is joined by acclaimed director and choreographer Nick Winston, whose recent credits include Bonnie and Clyde (Arts Theatre) and Beauty and the Beast (as associate director and choreographer for the UK tour) and upcoming projects include a new world tour of We Will Rock You and a remounted UK tour of Rock of Ages.

Mark Goucher said: “I am delighted to be bringing this re-imagined production of the beloved Shrek the Musical to audiences across the UK and Ireland. The story of Shrek is known and loved across the world and this show is an incredibly joyous, fun and uplifting evening at the theatre that will be enjoyed by all ages.”

The Oscar®-winning DreamWorks animated film Shrek celebrated its 20th anniversary last year. Shrek the Musical was first performed on Broadway in 2008, receiving eight Tony nominations, and the award for Best Costume Design. The original West End production was nominated for four Olivier awards, including Best New Musical, at the 2012 Olivier awards. Nigel Harman received the award for Best Supporting Actor for his role as Lord Farquaad.

Join our unlikely hero Shrek and his noble steed Donkey as they embark on a big, bright, musical adventure. Based on the Oscar®-winning DreamWorks animated film, the Broadway and West End hit Shrek the Musical is a fun-filled, hilarious musical comedy with a cast of vibrant characters and a ‘shrektacular’ score.

Featuring the beloved Princess Fiona, the evil Lord Farquaad, a host of magical fairytale characters and fabulous songs including the smash hit ‘I’m a Believer’, Shrek the Musical is a ‘musical extravaganza for big kids and little kids alike’ (Bristol Post).

Come join the adventure as Shrek and Donkey endeavour to complete their quest, finding unexpected friendships and surprising romance along the way. A perfect night out for the young, and the young at heart, the award-winning Shrek the Musical is guaranteed fun for all ages and will have you dancing in the aisles and laughing all the way home.

Tickets are currently on sale and can be purchased from the Theatre Royal Plymouth website.