The Snow Beast, a scientific spectacle for all the family, comes to Theatre Royal Plymouth 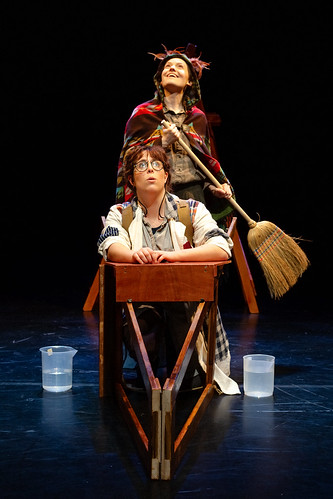 The Snow Beast, a scientific spectacle for all the family, comes to Theatre Royal Plymouth

The Snow Beast is a collaboration between critically acclaimed local Exeter based Scratchworks Theatre Company & award-winning local writer Jack Dean. This family friendly theatre show (ages 6+) brings live science experiments to the stage as we follow a female scientist, Faina, who sets out on a quest to find the mystical Snow Beast.

The show comes to The Drum at Theatre Royal Plymouth from 8–10 February 2023.

In the snowy town of Seldomberg test tubes bubble, experiments explode and new inventions whirr for the Science Academy’s Final Exams. But Faina’s got a problem… her project has unexpectedly burst into flames!

Desperate to pass her Final Exams, Faina sets off on a perilous expedition to find the legendary Snow Beast. With help from her owl assistant Maude, they encounter extraordinary spectacles and mountainous obstacles as they battle through the wild, wintry wilderness in search of the truth.

Can you help Faina and Maude overcome the scientific puzzles along the way? Does The Snow Beast even exist?

The show is interactive allowing the children to get involved with the live science experiments in the production. It’s also packed full of inventive storytelling, puppetry and beautiful Scandi-inspired live music & songs by Lucie Treacher and the company.

Laura Doble, Co-Artistic Director, said: “We’re committed as a company to helping to inspire young minds in the world of science through our theatre work. To keep the fun going after seeing The Snow Beast, we’ve created an audiobook version of the show for families to try out at home.”

Scratchworks also offer an audiobook version of the show, ‘Faina and the Snow Beast’ which includes a science activity pack for children to try out from home. A great way to keep the family entertained and learn more about the science and ideas behind the show!

Alice Higginson-Clarke, Co-Artistic Director, said: “We love sharing the science with all our audiences – young or old – the magic of chemical reactions or physics inspired stunts are so exciting!

“We’re very excited to share The Snow Beast with live audiences and inspire the next generation of young scientists!’’

The Snow Beast comes to Plymouth as part of a national tour for Spring 2023.

“This is a great show that can be enjoyed by all the family – and you might even learn something on the way.” ★★★★ Broadway Baby

“This likeable show is performed with zest” Lyn Gardner