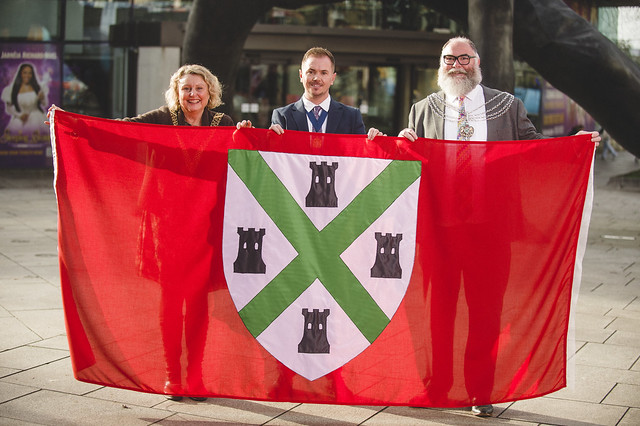 The flags raised represent the city and the theatres core values, with a special flag to celebrate TRP that was designed by Mackenzie Boxley, a student at Knowle Primary School in Whitleigh following an open competition for children during the summer. Mackenzie was one of the special guests who participated in the flag raising event on Tuesday along with the Lord Mayor of Plymouth Councillor Sue Dann, Deputy Lieutenant for Devon, Adrian Vinken CBE OBE DL and Dr Alan Butler from Pride In Plymouth.

“Plymouth is proud maritime city and flags are an iconic way of marking that.

“TRP is immensely proud to be of, and for, the people of the city, and Devon more widely. Flying the flags for the city and the county is a perfect way of demonstrating our civic pride.

The pride flag demonstrates our inclusivity. We want TRP to be special for everyone regardless of your background or life experiences.

Mackenzie’s bright and colourful flag is the first of what I hope will be many changing flags on that pole. We will use it to mark important civic moments, launch more visual art design competitions and promote specific shows.”

This year TRP is celebrating its 40th anniversary, since its opening by HRH Princess Margaret in 1982, the theatre has become the largest and best attended regional theatre in the UK, a beacon of creativity and the principal centre for performing arts in the South West.

Over the last 40 years, 15,000,000 people have seen shows, taken part and worked on and off TRP’s stages. In their 40th year the theatre has demonstrated their commitment to responding to the world around them by being brave and courageous in their creative ambition and will continue their desire to bring people joy over the next 40 years and beyond.