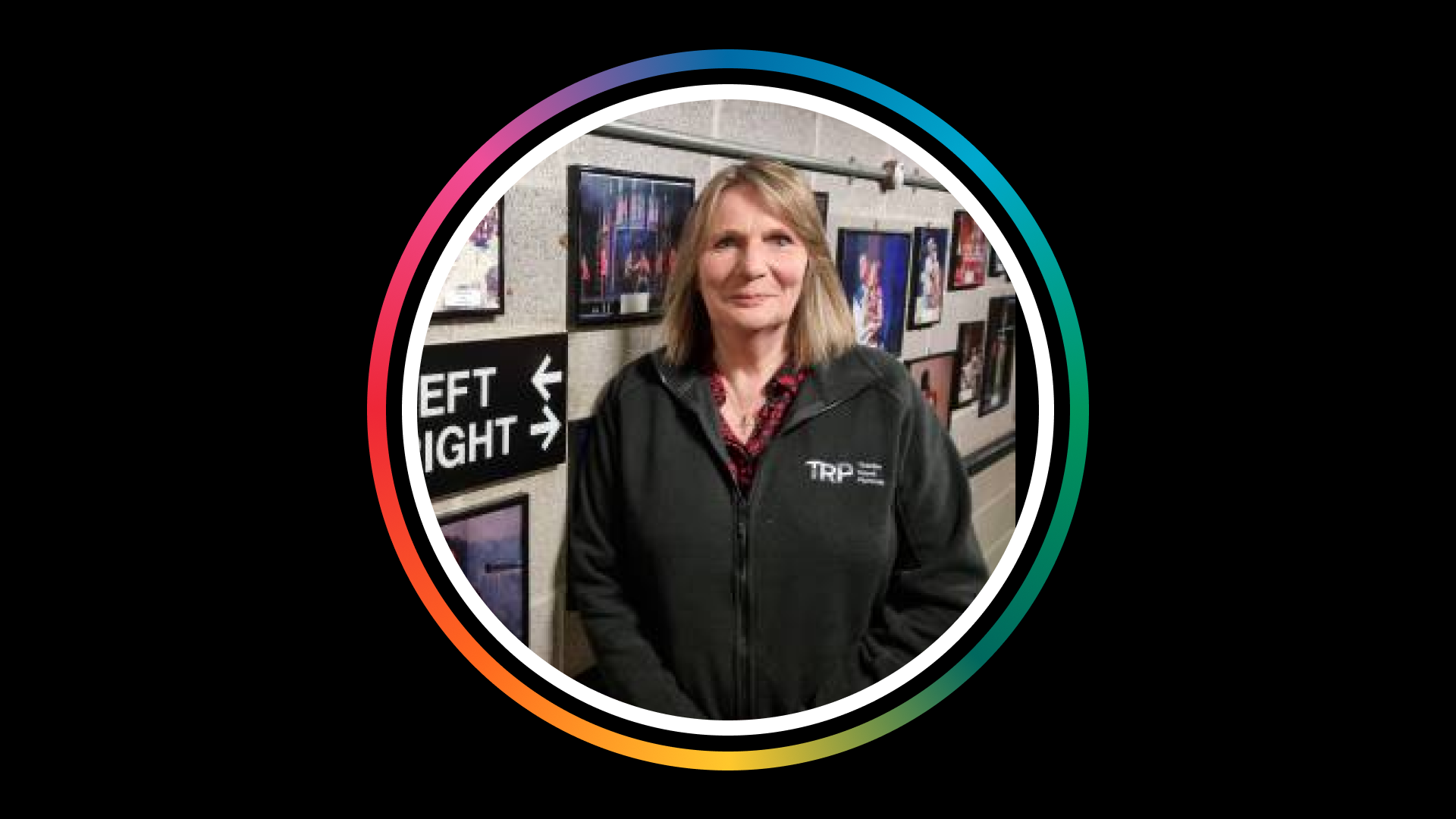 As Theatre Royal Plymouth celebrates 40 years in 2022, long-serving staff member Jill Bright, who has worked in four different roles here over the past 26 years, shares her memories of the theatre and lifts the lid on how she came to working here.

Currently a stage door keeper, Jill knew from a young age that she wanted to work in a theatre.

“I grew up in South East London, near Lewisham with my mum, dad and three sisters. I used to go to see shows with my mum all the time, but I’d always want to know what went on behind the scenes.”

Jill recalls how her school teachers dissuaded her from a career in theatre.

“I wasn’t very good at school at all and left school at 16. My careers teacher when I was 14 or 15 was Miss Jefferies. I said to her ‘I want to work in the theatre’ and she said ‘you wouldn’t be an actress’.

“I didn’t want to be an actress, I wanted to work backstage, but I unfortunately I wasn’t told about what opportunities there were.”

Jill’s first job was a brief stint in McDonald’s before she moved into the admin department at New Scotland Yard, and later Catford police station. When Jill decided to relocate to Devon, she enrolled onto a degree course in Drama in the Community at South Devon College, at the age of 30.

“During the course, we came to the Theatre Royal Plymouth. The marketing officer at the time gave us a talk on marketing and I loved it. We also came to a few shows here. Once I came to see a friend in a show and I came through stage door, thinking ‘oh my god, I really love this place.’

“You know when you go to a place and think ‘I’d really like to work there.”

Alongside university, Jill worked as a production manager for the Devon Youth Theatre.

“I loved the idea of setting up an empty space, seeing the audience come in, watching the show, and then being the last one out.”

It was after completing university and moving to Tavistock that Jill sought a job at TRP.

“I wrote a letter and said I can do anything. I got a call and went in for a chat. It was a casual job in the Box Office, which I started in 1996.”

Jill also spent time working in the admin department, and then became house manager, where she oversaw many spaces at TRP as well as the TR2 reception. Long hours and having a grandson meant Jill was keen to find a part-time role within the theatre and five years ago, she became one of the stage door keepers. Jill particularly enjoys meeting visiting companies. She is often the first person they see when arriving at the theatre, ahead of a production opening.

“I love that first time when they come in and welcome them or maybe welcome them back if they’ve been before. I love getting to know people. It’s really good fun.” Meeting celebrities who she idolised as a youngster, is one aspect which Jill looks forward to at stage door.

“You try to be really cool when you see the famous people,” Jill laughs.

“Christopher Biggins is lovely; he’s been here a few times. Lovely, lovely man. David Suchet is one of my favourites as well. I had lunch with Matthew Kelly in the green room once. My absolute favourite is Gary Wilmot. He’s become a good friend and I sometimes go and see him in shows in London. And recently, Brenda Edwards from Loose Women. She was here for Hairspray and the first thing she said to me was ‘do you want a doughnut?’ I thought ‘we’ll be friends.’”

Working at TRP has meant Jill has watched many productions here. She recalls some of her favourites.

“I’ve grown up with Oliver, so that’s always my favourite but Mary Poppins is the one. It was so good. I’ve been to see Phantom of the Opera a number of times in Plymouth and the West End. It’s the show I always go and see with my daughter.”

Having been officially opened by Princess Margaret on 5 May 1982, the Theatre Royal Plymouth is currently celebrating its 40th year. Jill explains the biggest changes she has experienced during her time here.

“There’s been a lot of changes. All the seating in the Lyric’s been changed and in 2013 the front of house area was all done up. We were shut for quite a few months, and when they showed all the staff round, I was the first one on the balcony.”

“At home I’ve got all the photographs of how it’s looked over the years. I could do a good archive actually,” she jokes.

Jill keeps in contact with many of her former theatre colleagues, describing the staff as her “second family”.

Away from the theatre, Jill has been a volunteer at Hospital Radio Plymouth for 20 years. She also has two grandchildren who she sees regularly and keep her entertained. Reflecting on a quarter of a century at Theatre Royal Plymouth,

Jill concludes: “There’s nowhere else I’d like to work, genuinely.”