By: Claire Skinner, Archivist at The Box

Did you know that 2022 marks the 40th anniversary of the Theatre Royal Plymouth? TRP will enjoy a month of celebrations from mid-September to mid-October including the installation of four new flagpoles on the roof, one for each decade.

But did you also know that today’s building is the fourth of that name in Plymouth?

The first Theatre Royal opened in 1758. Mr Arthur of the Bath Players leased three partly-built houses in Frankfort Street, close by the Frankfort Gate, and turned them into a theatre. (Frankfort Street was almost completely destroyed in the Second World War and the area is now covered by Frankfort Gate shopping centre and the Pannier Market.) The Theatre was visited by HRH King George III in 1765, which is how it gained its name. In The Box archives we hold various playbills for this institution, including 3488/6788. 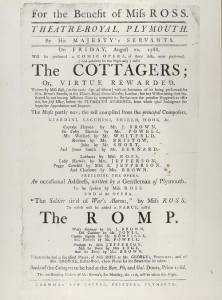 The second Theatre Royal in what became George Street was designed by famous architect John Foulston. This beautiful watercolour of his design is in The Box’s art collection, ref 1914.154.1. 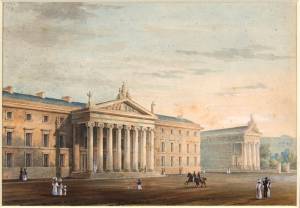 We also have the contract for its construction, dated 1811, and related correspondence in the Borough archives, as well as later plans and playbills. The foundation stone was laid on September 10th 1811 by then Mayor, Edmund Lockyer, and the theatre opened on 23 Aug 1813. This theatre suffered several major fires, in 1862, 1863 and 1878, requiring major renovation. It was demolished in 1937 to make way for a cinema, called the Royal Cinema.

The Royal Cinema acted as the Theatre Royal again from 1954-1958 when it was used for stage productions, although this was shortlived and it was succeeded by the ABC Cinema (afterwards the Reel Cinema.) An aerial photograph c1993 (ref 3488/166) © Mirrorpix shows the building in the top right hand corner. 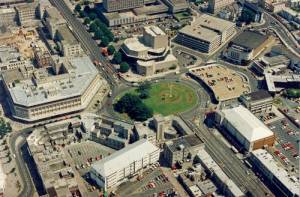 The fourth, and current, Theatre Royal, in Royal Parade, Plymouth, (known as TRP) can be seen in the same photograph, towards the top centre. 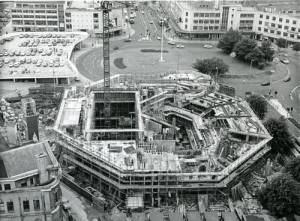 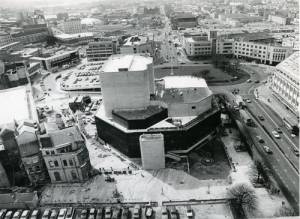 HRH Princess Margaret opened the new premises on 5 May 1982 and you can watch this for free on the BFI Player. The first major visiting company to perform at TRP was the Royal Ballet, which performed Manon in May 1982. As well as hosting productions, TRP also had its own theatre company whose first performance was A Midsummer Night’s Dream in June-July 1982. A programme of the time (ref 2709/3) states: “A unique experiment is taking place here in Plymouth. For the first time in English theatre history a new building has been designed and built expressly to serve as a major touring venue and at the same time house a major resident producing company.”

TRP was designed from the outset to provide variety – with two contrasting theatre spaces and a moveable ceiling. “It is capable of staging everything from the largest ballets to the most intimate one man show…” (2709/3)

The Lyric, the main auditorium, seats 1300 and the Drum currently seats 160 people. The latter specialises in new plays and in innovation and collaboration.

A separate production and learning centre, TR2, opened in 2003. It contains set, costume, prop-making and rehearsal facilities, and provides one of the biggest education and outreach programmes of a regional venue.

A £7 million regeneration project took place in 2013 resulting in the creation of The Lab which is designed as a community theatre space for exploration and experimentation. 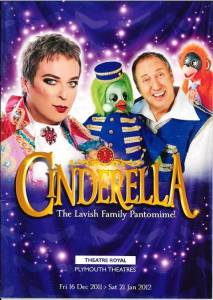 At The Box we hold a large number of theatre programmes which not only record productions but also show the development and evolution of the TRP into what we see today.  (They can also be useful for social history, including advertisements for local businesses and photographs showing changing hairstyles and fashions!) Several of these are on loan to TRP till mid-October and will be displayed alongside props and objects to celebrate the many and varied music, dance and theatre productions at TRP over the last 40 years. Happy Birthday Theatre Royal Plymouth and here’s to another 40 years!