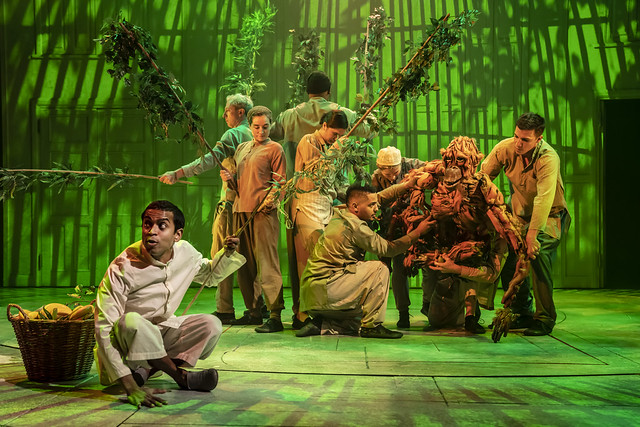 Lolita Chakrabarti’s dazzling Olivier Award winning stage adaption of Yann Martel’s best-selling novel Life of Pi, which is currently running at Wyndham’s Theatre in the West End and stars an extraordinary life-size puppeteered Bengal Tiger, begins its first ever tour of the UK and Ireland at the Sheffield’s Lyceum theatre in August 2023. The critically acclaimed production also begins previews this week at American Repertory Theatre and opens on Broadway next March.

‘IT WILL MAKE YOU BELIEVE IN THEATRE. A TRIUMPH.’

Lolita Chakrabarti said: ‘It is incredible to begin this tour at Sheffield Theatres, where Life of Pi began its journey, and to start the tour across the country from this great city.  It has been an extraordinary year in the West End and the success of the play has been both a privilege and a delight – from all the amazing awards to the standing ovations we get every night. It is testament to Yann Martel’s beautiful and moving story. I am so grateful for his trust and generosity in sharing it with me and allowing our amazing creative team to tell his story our way.’

Life of Pi, which is running in the West End until 15 January 2023, first opened to critical acclaim at the Crucible theatre in Sheffield in 2019.  Future International plans for the show include its North American Premiere at the American Repertory Theater at Harvard University from 4 December 2022 to 29 January 2023, followed by its Broadway premiere at the Gerald Schoenfeld Theatre from 9 March 2024, with an official opening on 30 March 2024.  A European tour will follow the tour of the UK and Ireland and there are plans underway for a tour of Australia and Asia.

Life of Pi won five Olivier Awards in April 2022.  As well as Best New Play, and Best Actor for Hiran Abeysekera (the original Pi); in an historic first for the Olivier Awards – the seven performers who puppeteer the Tiger ‘Richard Parker’were collectively awarded Best Actor in a Supporting Role. The production also picked up awards for set (Tim Hatley, Nick Barnes and Finn Caldwell), and lighting design (Tim Lutkin and Andrzej Goulding).

‘THE PUPPETRY IS OUT OF THIS WORLD’

Based on one of the best-loved works of fiction – winner of the Man Booker Prize, selling over fifteen million copies worldwide – Life of Pi is a breath-taking new theatrical adaptation of an epic journey of endurance and hope.

After a cargo ship sinks in the middle of the vast Pacific Ocean, there are five survivors stranded on a single lifeboat – a hyena, a zebra, an orangutan, a sixteen-year-old boy and a 450-pound Royal Bengal tiger. Time is against them, nature is harsh, who will survive?

Award winning writer Yann Martel’s works include The Facts Behind the Helsinki Roccamatios (1993), Self (1996), We Ate the Children Last (2004), Beatrice and Virgil (2010) – a New York Times Bestseller and a Financial Times Best Book, 101 Letters to a Prime Minister (2012) – a collection of letters to the prime minister of Canada; and The High Mountains of Portugal (2016).

‘EVERYTHING ABOUT THIS PRODUCTION IS AMAZING.’

Lolita Chakrabarti OBE is an actress and an award-winning playwright. Her debut play Red Velvet opened at the Tricycle Theatre before transferring to New York and then London’s West End. It earned her the Evening Standard Charles Wintour Award for Most Promising Playwright 2012; The Critics’ Circle Award for Most Promising Playwright 2013; AWA for Arts and Culture 2013 and an Olivier Award nomination for Outstanding Achievement in an Affiliate Theatre 2012. Red Velvet is now on the Drama syllabus for A level and is studied at universities in the UK and USA. Red Velvet has had over forty productions worldwide to date.

Other writing credits include: Hymn (Almeida Theatre/Sky Arts); Life of Pi (Sheffield Theatres) for which Lolita won the award for Best New Play at the Olivier awards 2022, the UK Theatre awards 2019 and WhatsonStage awards 2019. Life of Pi has won ten other major theatre awards in all categories.; an adaptation of Italo Calvino’s Invisible Cities (Manchester International Festival and Brisbane Festival); Stones of Venice, a VR film for New Vision Arts Festival in Hong Kong; She curated The Greatest Wealth (The Old Vic) celebrating 8 decades of the NHS which was also shown online during the pandemic; she was dramaturg on Message in a Bottle (ZooNation/Sadler’s Wells). Lolita is dramaturg on the forthcoming Sylvia at the Old Vic.

Life of Pi is produced by Simon Friend in association with Playing Field and Tulchin/Bartner.