Click the arrows to see the photos of Hugh’s trip 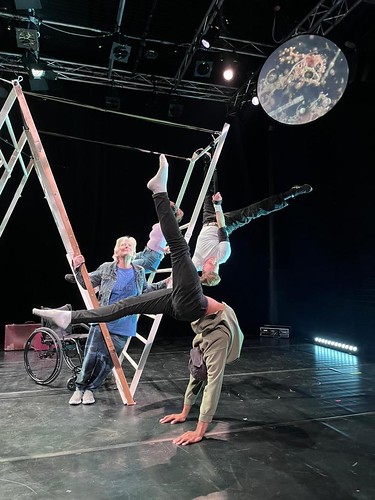 Delicate is a new circus show presented by Extraordinary Bodies and co-produced with Figurteatret i Nordland (Nordland Visual Theatre) and Theatre Royal Plymouth.

In this blog, Hugh reflects on his time in Norway and working alongside the cast and creatives of Delicate, during its final week of rehearsals in the country.

I went to Norway because Theatre Royal Plymouth are one of the main co-producing bodies and the producer made a specific request that I could attend their final week in Norway, representing TRP. I was thrilled to go, it was a brilliant opportunity.

It was my first time in Norway and I found it thrilling. I certainly relished in the opportunity to go.

I explored the area I was in, a tiny village in the middle of nowhere; a beautiful setting surrounded by mountains, the sea and fish. The location was something else.

It was broad daylight all the time and I liked that. I loved its peace and calm. It’s a very tranquil place and it felt quite wild and natural.

I felt incredibly involved and warmly invited by all the creatives there to actually have my own voice on the progress of the production and I felt really honoured by that, but also representing our partnership within that forum, it felt great that TRP had a voice in the progression.

I met with Marianne Thallaug Wedset, the lighting designer, Damian Coldwell, the sound designer, and Michael Achtman, the video designer. The lighting, sound and video design all came together with the same wonderful spirit as the performance on the simple but versatile design. It was a pleasure to witness this.

The facility in Norway is absolutely superb. They have everything – a workshop, a costume and props department, administration offices, rehearsal rooms, laundry, a kitchen, even a sauna! The rehearsal room is a similar size to The Drum, so you can really visualise how everything will look in that space.

The work was completely focused. We had 10-hour days and my observation and participation has been observing Jamie, Eilis and Lydia direct the cast. They managed to have a run through of the piece daily, and I was observing all those developments.

The show is progressing really well and I think the cast and creatives have produced something really incredible. The running time is 45 minutes, it’s very physically demanding for the cast.

They reached a first preview with an audience on the Friday when I was there. The audience reaction was very solid. A solid applause, richly deserved and a very honest response. They loved the production.

We have a long affiliation with Extraordinary Bodies. We were involved with them last year with the Funky Llama Festival when they bought their production Human, and we’ll be co-producing another production with them next year.

I’ve been involved with this production all the way and we have a weekly meeting to touch base on progress, so I feel very close to it.

What a pleasure to be able to go to Norway and witness the progression of this piece of work. A huge thanks to TRP for letting me go, to Jamie, Eilis and Lydia and the creatives too.

Delicate comes to The Drum at Theatre Royal Plymouth from 30 September – 15 October 2022.